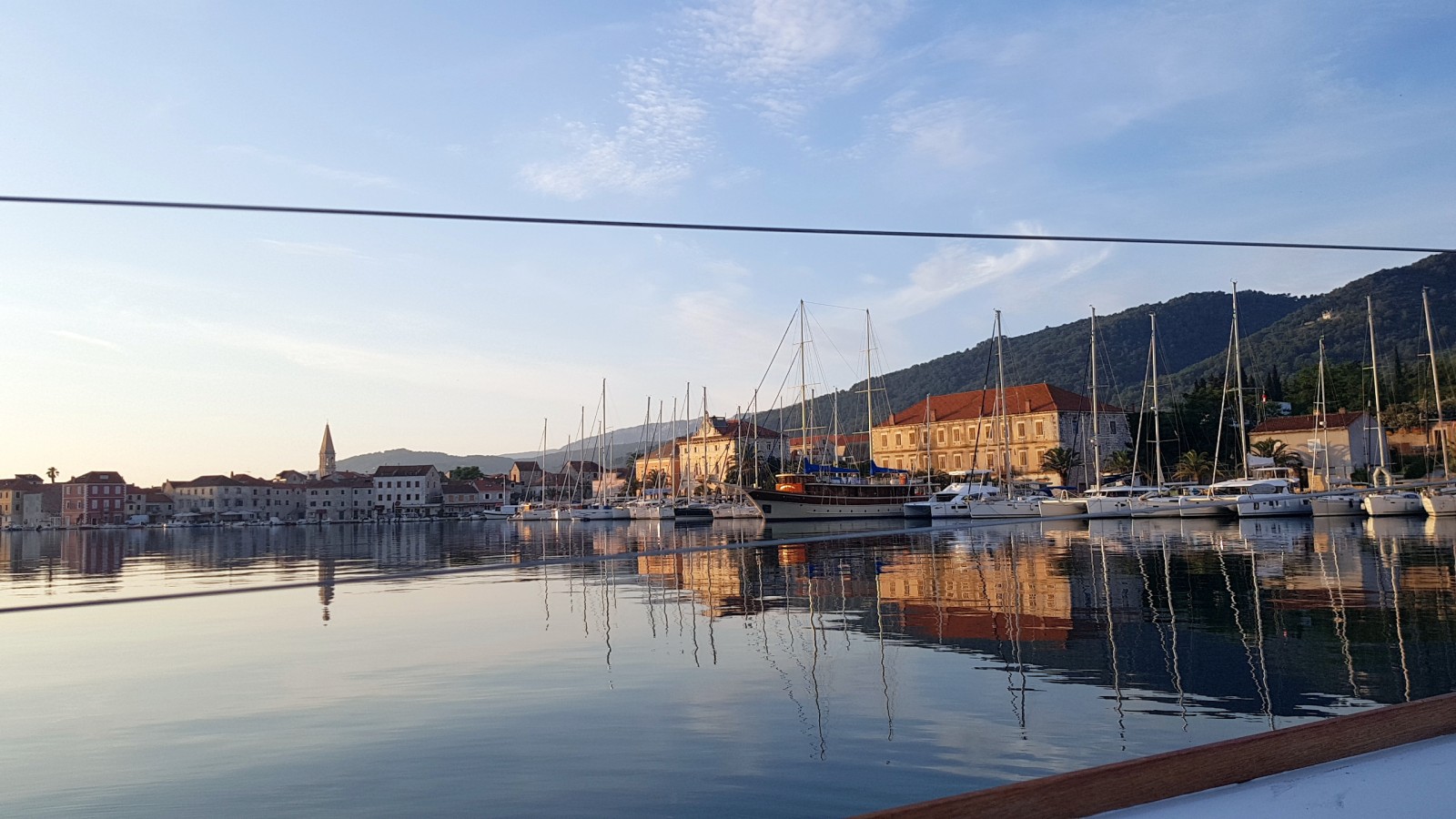 The morning in the marina was simply stunning with the sunrise lights, some light haze, the awakening city and the the many sailboats around.

After the forgettable dinner we had much more luck with the breakfast in the nearby Domus Maritima. Interestingly on their website their contemporary design caffé is not even mentioned so you may think it is just an accomodation. When we were there we did not even now they have an accomodation, we were just enjoying our breakfast in the design garden. We tried some interesting vegetable + fruit smoothies which seemed a bit bizarre on the menu but everything was so balanced in the right proportion that it was really great at the end.

After the hearty and healthy breakfast it was time to say goodbye to Trogir and continue our voyage to the south to our destination Stari Grad. As we had enough time we stopped for a swim at the famous Drevnik Veli – Krknjasi bay blue lagoon

The bay is beautiful we anchored easily but you need to watch the depths and approach it from south west.

After the quick dip we continued to the south east just near the shores of Solta then later Brac. The vineyards on Brac were really spectacular sometimes it seemed that the plantations are nearly on a vertical surface, no idea how they go up there and do the necessary works.

We still had some time before Stari Grad so we decided to visit the famous Zlatni rat – golden horn beach. We anchored at the eastern part and went ashore with the dinghy. We had a quick dip and walked around on the shore a bit. Considering how famous it is for me it was a big disappointment… On the drone shot below it may seem like a sandy tropical paradise but in reality it was a simple pebble beach with crowd and some litter – you can easily find much better ones. We returned to the boat, and other crew members who did not came ashore mentioned that they were invited to the neighbour 45′ catamaran by some barely clothed columbian girls to join the party. They did not take the opportunity maybe they missed the party of their life we will never know 😀

We had very light to no wind all day se we had to motor a lot and finally after leaving Zlatni rat we caught some breeze. Everyone started smiling instantly and enjoy the speed and the heeling.

It was nearly sunset after many tacks while beating upwind we reached Stari Grad. It was a long day but very eventful day, we were looking forward to the dinner as everyone was very hungry. As we arrived late we did not get a bert on the south shore where are the showers are, there was only free place on the north shore where the new shower facility was still being built. It is not that we would mind some walking but if you have a look at the map of Stari Grad you will see immediately the issue… You have to walk ~2-3 km to the toilet or to have a shower. We skipped the shower this time and voted for the dinner. After a long walk we arrived to Konoba Pharia. We got a place outside in the garden among the hundred old stone walls. Typical konoba foods but this time it was excellent. No deep fried cevapcici, even the ajvar and the french fries were home made what is not evident everywhere unfortunately.